Skip to content
Fri. Apr 3rd, 2020
A young man, named Sarfraz had been shot down by Rangers publicly on the eve of 8th June, in Benazir Bhutto Park, Boat Basin area of Karachi. He was involved in a crime according to Mr. Rehman Malik, Interior Minister. The rangers stated that he was killed in an encounter. 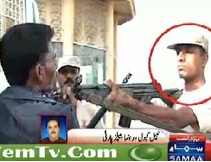 Those who have seen the video of this incident, captured by public present there, must’v observed the encounter. The encounter with a helpless, empty handed boy, student of 10th class. Well, if he was involved in a crime (looting as mentioned), how does this crime renders him executable in public by a ranger? Is there no legislation in country, does the constitution allows people to show this brutality on their own will? The poor soul was shot in  was left bleeding to death.
The humanity and sensibility must’v mourned over the cold bloodedness of 5 Rangers standing there. I recall the brutality on the face of killer when he fired from his G5, another person holding the boy from his hair. They seemed least human to me. These are saviors of public, but public needs saviors to save them from these people.

The society has reached to such a paranoid state that when this video was posted on facebook, a person commented that he could not condemn the act until he knew what lead the boy to reach in this situation. Alas! We need some fair justification to condemn any act of brutality. Even worst of the crimes does not allow any person to be sentenced to death without being prosecuted legally. Where is the humanity, that would compel a human to call brutality a brutality without finding excuses to be a less human. And what for, Mr. Malik, is this a jungle where a person involved in crime should be shot dead without any legislative procedure. The constitution and the legislators in parliament, what use are they of, then?
We, as a nation needs a serious psycho-therapy. Because, the killers are not just these 5 rangers. The whole nation is responsible for this violence. We are a nation who will not give benefit of doubt to a poor dead boy but will save that for a psycho ranger’s defense. From the brutal murder of Salman Taseer, Shehbaz Bhatti, Saleem Shehzad to this boy, we as a nation never condemned any violence. We just sat silent or rejoiced the killings sometimes. The realisation of the effects fall upon such nations like dawn, suddenly, straight in face. But that is always too late. Whether they are drone attacks, Kharotabad incidence, security failure or sialkot incidence. The silence always haunted the nation. No one found enough time from his pains or joys; in case of common man or elite respectively, to get him out of the state of denial and speak out.
A friend told me today that we should stand up and stand for revolution. But stand against what, ourselves? Revolution against ourselves? For those 5 men were not individuals, they are representatives of whole cold blooded and paranoid society. This is a state of agony inflected upon us by ourselves by getting intoxicated with refusal and denial. I have least of hopes, sadly.